A few months ago, I received one of these arcade cabinets as a gift and after playing it for about 30 seconds and being reasonably impressed with the screen quality and playability I began wondering if it might be possible to load or flash other games onto the cabinet.

These cabinets come in multiple variants and there is something in common with all of them. Take a look at the list of supported cabinets (Disclaimer: I am no Atari expert, so if my versions are wrong please let me know) :

The thing that all of these platforms have in common is that they utilized the MOS 6502 CPU!

It’s important to note that people on AtariAge and other forums already did a teardown and found multiple test pads that allowed other ROMs to be played, namely Centipede and QBert. See these threads for more information:

After seeing this I was curious as to what the actual ROM might actually look like and decided to tear down my own cabinet and take a look at the components. We’ll be focusing on the Rampge cabinet for this work! 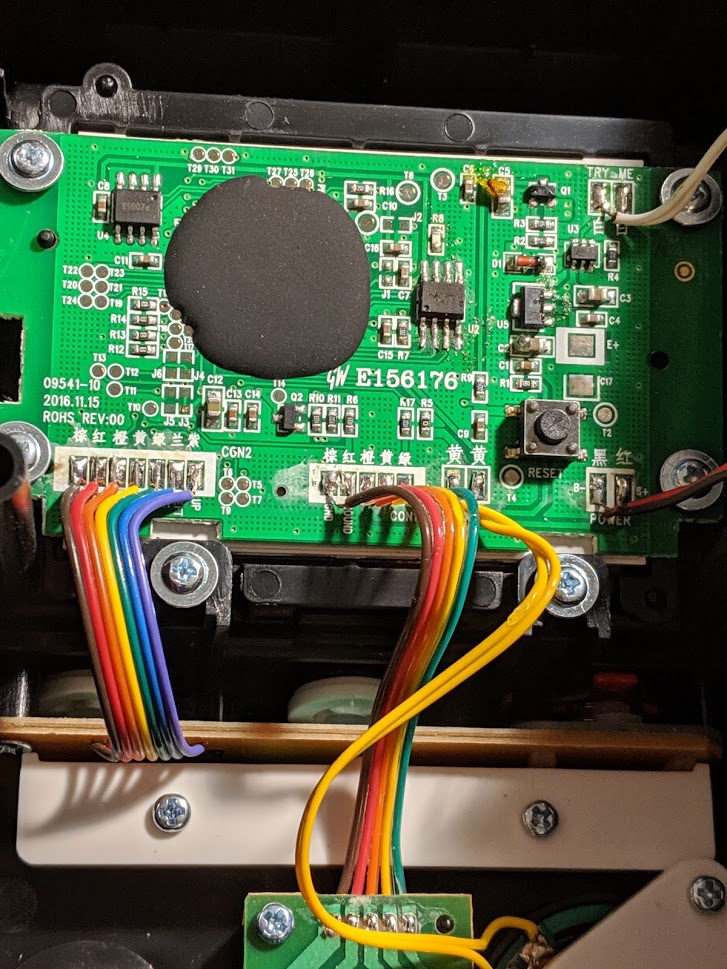 According to some other folks who had previously taken a look at these, the component covered in epoxy is essentially a NES on a chip (NOAC). Aside from that we have see two TSOP 8 packages on the board and that’s about it!

What to do from here

The goal of this and upcoming posts is see if we can get a dump of any external storage, and possible flash other ROMS to this cabinet, if it’s a NOAC we may be able to flash other NES roms onto it. Perhaps we can hack together a software mod that will allow us to swap between ROMs on the same cabinet (assuming that the proper controls are present)

When looking at any embedded system from a reverse engineering perspective, one of the first things you do is try to catalog all of the components present. Luckily for us, this target has very few onboard components and one of them even has a part number that we can google!

For those that are not familiar with SPI, I will give a brief overview of how it works, there are plenty of great resources and videos online that will provide a much better explanation.

In order to access a SPI device, the following sequence occurs:

Using the SPI protocol we can read out the pages of this EEPROM. There are multiple ways that this can be done and we’ll talk about a few in later posts:

I desoldered the SPI flash with a hot air station and placed it in a breakout socket - using the following diagram for reference I connected it to the Arduino’s SPI controller:

I used an Arduino to issue the SPI commands to read pages from the EEPROM. While this worked, it took a long time to read out as I had to read the pages from the SPI chip and send those over a serial link back to a program on my computer. This was a useful exercise for multiple reasons, writing a program to issue the commands directly gave me more insight as to how SPI worked and I gained familiarity with an Arduino library. It’s never a bad idea to get a little more hands on experience with an embedded protocol.

Using the EEPROM utility I wrote for the Arduino allowed me to read / write from the EEPROM using a simple python program on my host machine. The only problem with this is that it took some time, and readouts were inconsistent (almost certainly faults on my end). Some example code for reading the chip ID can be seen below, just to give an understanding of how to utilize the Arduino SPI libraries

However,I found the Flashrom utility in another blog post and decided to move forward with that instead. This was the one that worked best for me, and was the most consistent so we will cover that in this post. If there is interest I will write another post abut the first two methods and my attempts at using them! (I think it’s important to highlight the things you try that don’t work, we’re not all rockstars after all!)

The buspirate can be thought of as a multitool for hardware hacking and reversing. It comes out of the box with lots of features and supported protocols that make hardware analysis much easier and more streamlined.

Flashrom is a tool that has been developed to assist in dumping and extracting various storage mediums (such as our target EEPROM) and has support for a large amount of programmer hardware. We will be using the buspirate as the “programmer” for our example. It’s a great project that I’ve used countless times for tasks just like this.

If you wish to build flashrom from source, the steps can be seen below:

If we can manage to extract the data from this chip then we will have a great starting point, however there are sometimes issues with extracting SPI flash chips:

Before we worry about any of those issues, we need to connect the Buspirate to the chip, we’ll use one of these clips

Remember since this is a SPI flash, we need four pins: CS,CLK,MISO,MOSI. We will also need to provide a common ground for the reader and our cabinet. Using the pinout seen below (pulled from the datasheet) we can connect the appropriate pins from our clip to the buspirate. The breakout pins on the bus pirate are conveniently labeled for us so it’s just a matter of matching them up!

Once the clip is attached to the chip as seen below, we can try to run flashrom and get a dump of the EEPROM! 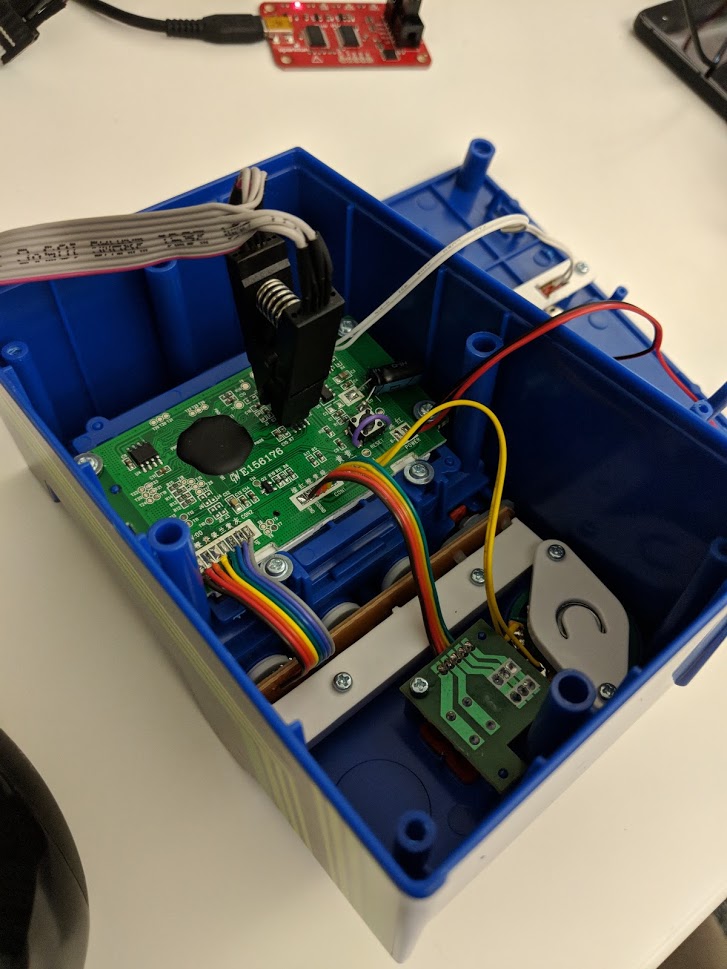 Flashrom is run as follows:

Success! It seems to have worked!

The arguments are pretty straightforward:

Taking a look at the results

To close out, let’s open up the resulting blob in a hex editor and compare the contents to the Rampage NES rom…

When we search for the first 0x100 bytes of the Rampage NES rom, we find them in two locations in the binary dump as shown below: 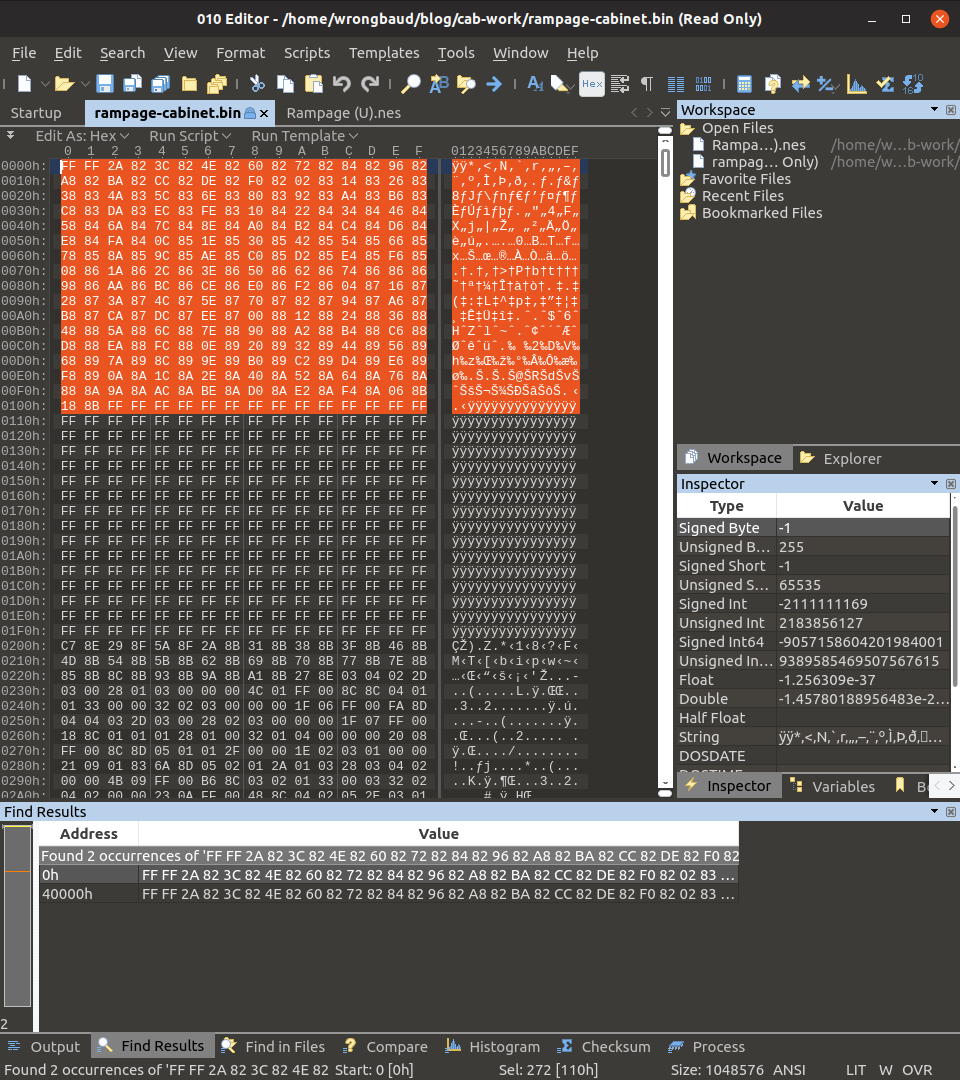 The start of the rom is located at offset 0 and offset 0x40000, this type of repeated patter is fairly common in embedded systems and sometimes used as a backup method.