I was looking around my apartment for potential targets for my next post and was pleasantly surprised to find the following XBox One controller still in the packaging: I don’t really play my XBox that much so I thought it might be interesting to tear down this controller and see what kind of information we could extract from it.

When assessing an embedded platform there are a number of things you can do or try to accomplish, with this post I want to demonstrate/test the following:

The first step to answering some of these questions will be a hardware teardown.

Opening up the case reveals the following PCB: 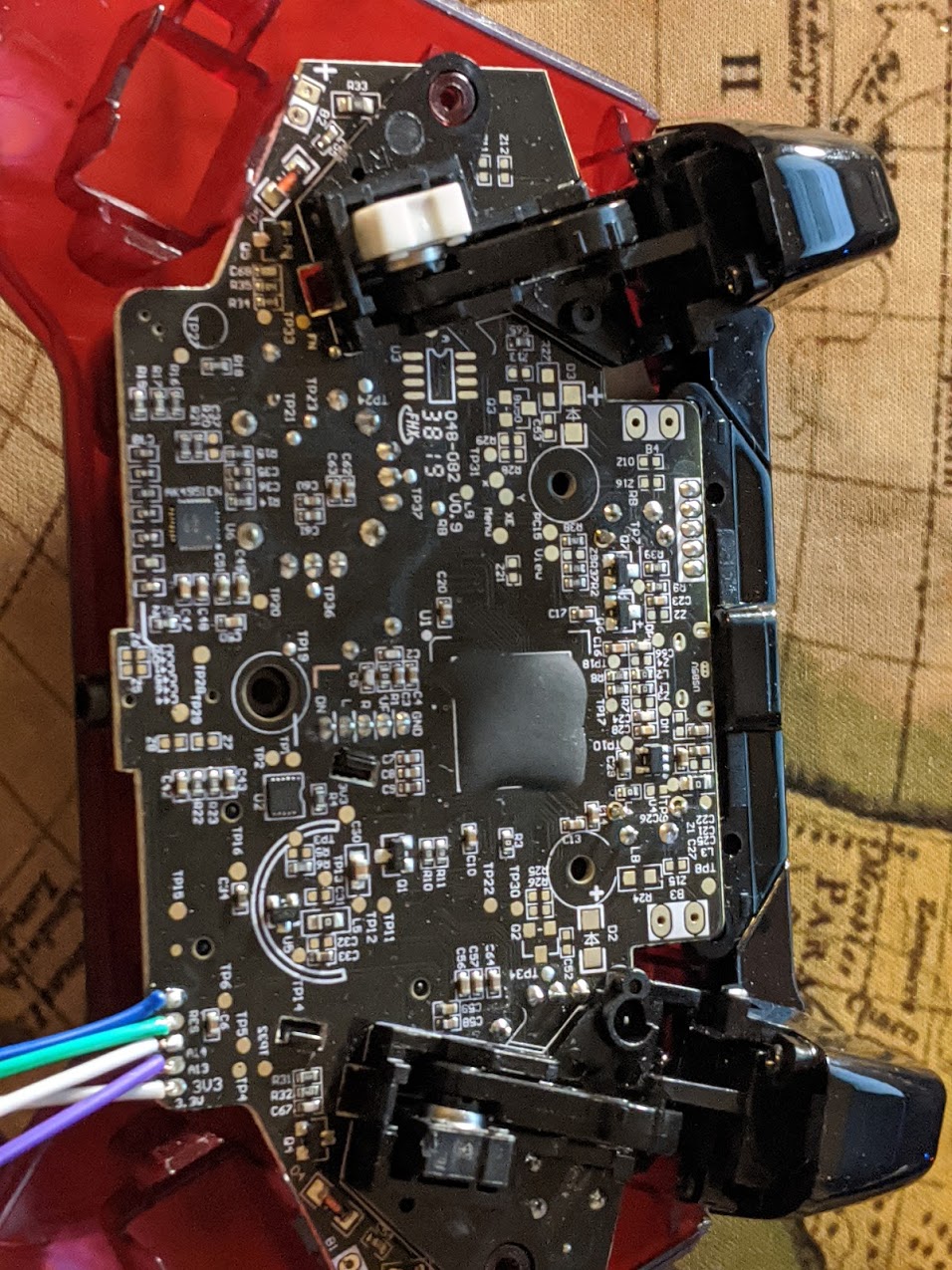 Note that there really isn’t too much to see here, as the main chip is covered in epoxy. Luckily for us a lot of the test pads are labeled, but the labeled ones seem to be test points for various button presses, so there’s nothing exciting there.

There is an IC labeled AK4961 towards the bottom of the board, but this is an audio codec chip. The datasheet can be found here. This chip is a low power 24-bit stereo CODEC with a microphone, headphone and speaker amplifiers. 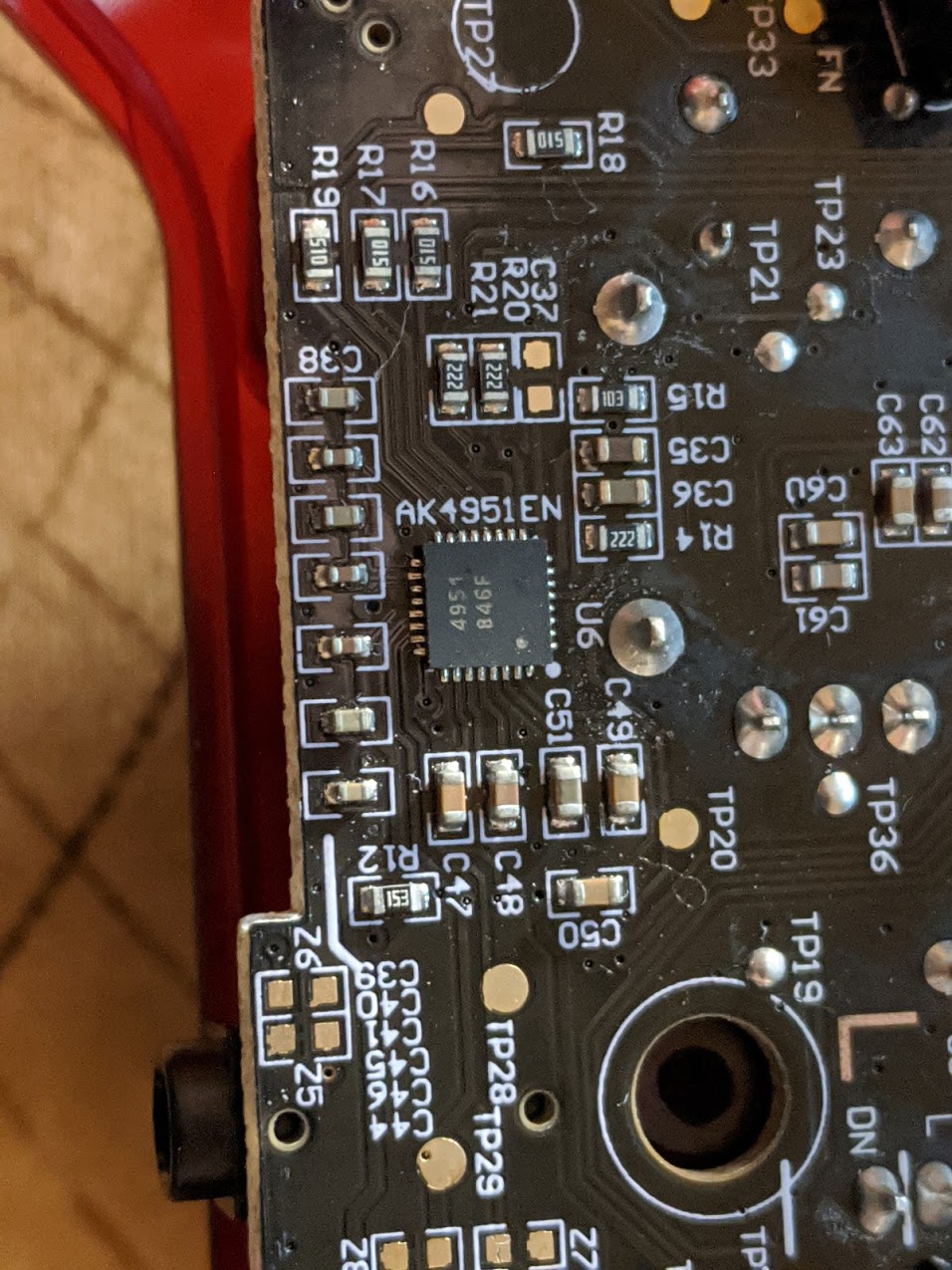 If we look to the right of this however there is a small grouping of pads with some silk screen labelling: 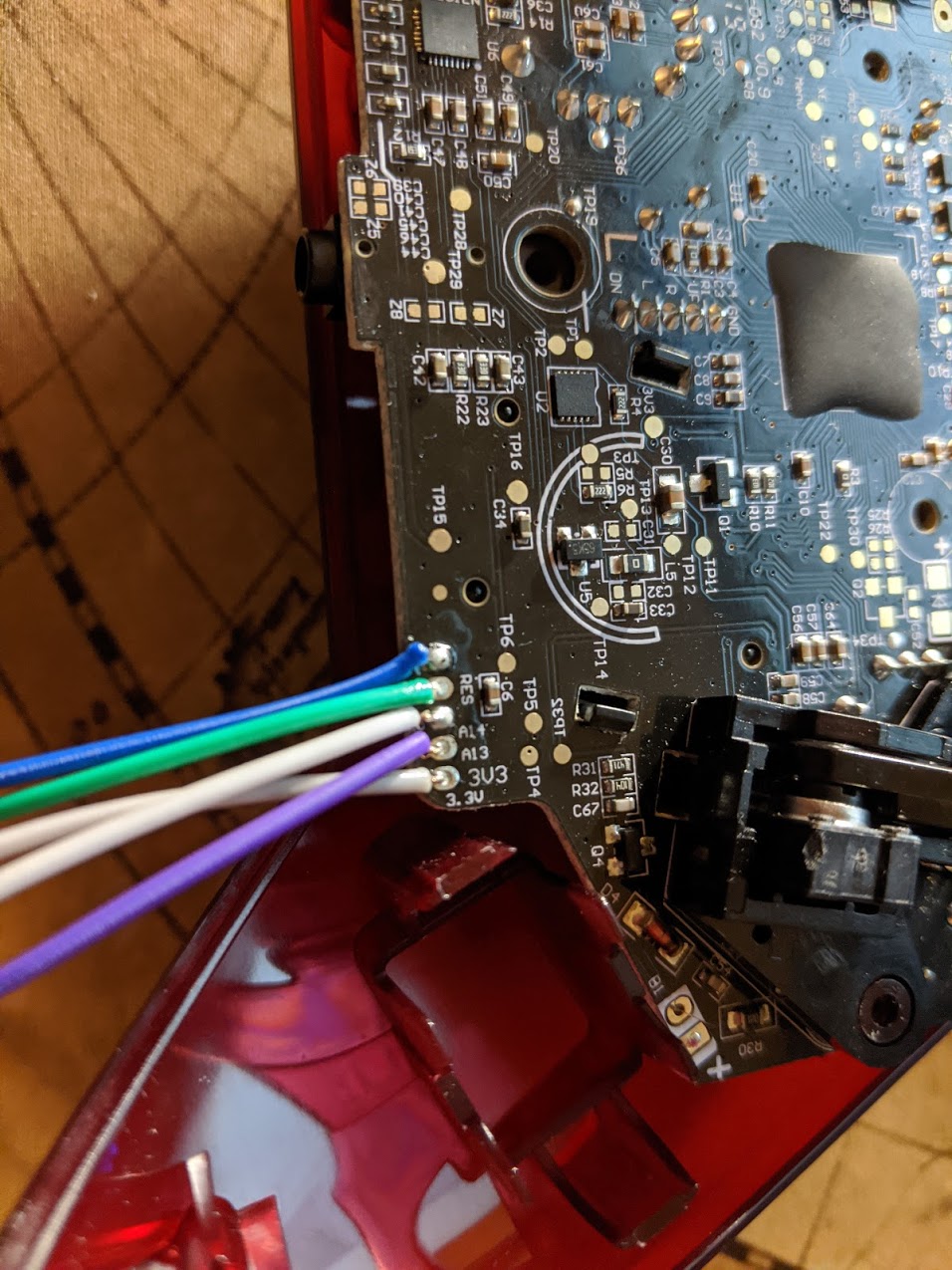 So we see 3V3,A13,A14,RES labeled in the silkscreen. This is worth taking a look at, and if you’ve read my previous post about the router teardown and discovering UARTs you may already have some ideas on how to proceed here. We’ll start by measuring the voltage of each pin with a multimeter:

There was no fluctuation or modulation on RES, A14 or A13, so these must be for something else, but what? Given that one of the labels is RES (which likely stands for system reset) there is a good chance that there are JTAG or SWD headers.

We can test if the RES pin actually resets the target by pulling it low with a 10k resistor (remember we’re reversing things here and don’t want to accidentally short something!). If you are not familiar with these types of headers or how a system reset pin typically works - they are often active low meaning that they idle at a high value and have to be pulled low to be activated. So if we monitor the output of dmesg -w and toggle this line low with a 10k resistor, what do we see?

Ah excellent, doing this caused the controller to reset, that’s one pin down, 2 more to go.

When looking at debug headers like this, a common assumption is that it’s for JTAG or some other form of hardware level debugging. However, the JTAG spec requires that there be at least 4 pins, TDO,TDI,TMS and TCK. We only have two on our target, so there is a good chance that this is a Single Wire Debug (SWD) port.

SWD is a common debugging interface that is used for ARM Cortex targets. As the name implies, SWD only requires one data line and one clock line, but how can we determine which one is which? Before we go down that route, we should understand a little more about how SWD works and what tools can be used to interface with it.

First off - SWD interfaces with something called a “Debug Access Port” (DAP). The DAP brokers access to various “Access Ports” (APs) which provide functionality including from typical hardware debugging, legacy JTAG cores, and other high performance memory busses. The image below pulled from this document provides a visual representation of how the DAP and APs are architected. 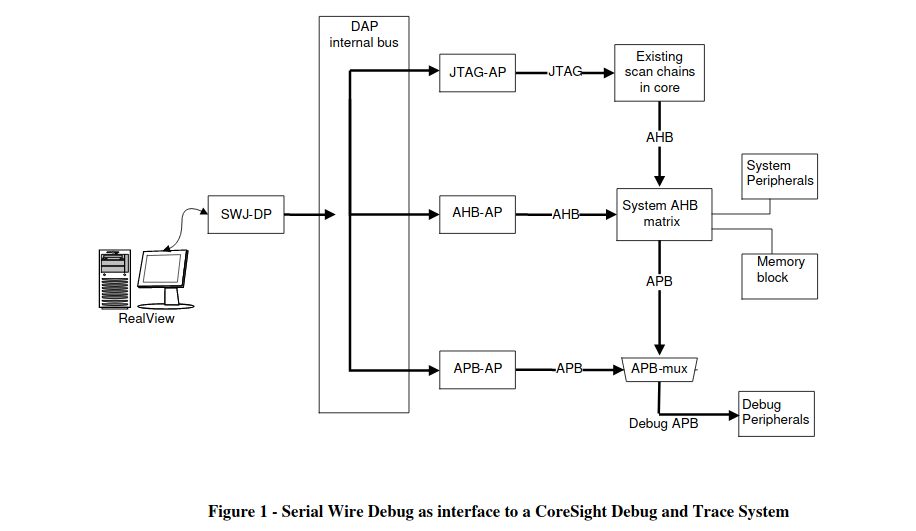 Each of these APs consist of 64, 32 bit registers, with one register that is used to identify the type of AP. The function and features of the AP determine how these registers are accessed and utilized. You can find all of the information regarding these transactions for some of the standard APs here. The ARM interface specification defines two APs by default and they are the JTAG-AP, and the MEM-AP. The MEM-AP also includes a discovery mechanism for components that are attached to it.

As we mentioned before - SWD was developed as a pseudo-replacement for JTAG. With SWD the pin count was reduced from 4 to 2 and it provides a lot of the same functionality of JTAG. One downside to SWD however is that devices can not be daisy chained together, which JTAG allowed for. The two pins that are used in SWD are below:

SWD utilizes a packet based protocol to read and write to registers in the DAP/AP and they consist of the following phases:

The packet structure can be seen in the image below, I’ve broken out the various fields in the table as well.

After the park bit (from the host to the target) there is a turnaround period, which basically means that the target will now respond on the same line.

From an extremely high level, the SWD port uses these packets to interface with the DAP, which in turn allows access to the MEM-AP which provides access to debugging as well as memory read / write capabilities. For the purposes of this post we will use a tool called OpenOCD to perform these transactions. We will review how to build and use OpenOCD next.

Clone the repository, configure, and build!

With OpenOCD built, we can attempt to debug this controller over SWD. In order to do this we need to tell OpenOCD at least two things:

To do the debugging, we will use the FT2232H which we used in a previous post to dump a SPI flash. With this interface we can use OpenOCD to query information about the target via SWD, which is important because at this stage in the reversing process we don’t even know what the target CPU is!

Below is a table for determining what pins on the FT2232H need to be connected to a SWD target:

Once we have the pins on the FT2232H hooked up to the target we can use the following script to query the DPIDR register on the DAP controller:

We can run this script with openocd as shown, with the following output (note that the first time it was run, there was no output, after swapping the SWD/SCLK lines the following output was printed out). See the table below for the connections to be made to the controller from the FT2232

Excellent! We’ve found a chip ID of 0x2ba01477 if we google this ID we see lots of hits for various Cortex M / STM32 devices - which would make sense because this processor series supports SWD. Now that we can communicate with the DAP, we should see if we can determine the exact processor that is being used - if this is one that has a configuration file written for it we will be able to dump flash banks and get other auxiliary information from the target processor. With this additional information we can tell OpenOCD to create a target, using the chip with the Cortex M definition, this will hopefully allow us to take more advantage of the DAP and get access to some of the more generic features while we try to figure out exactly which CPU we’re targeting:

When we run openocd with this config file we see the following results:

With these new changes, we can not only interact with the DAP and MEM-AP, but we can also debug the target via GDB. We can also determine that the target CPU is an STM32F2X series because of the 0x411 part number in the MEM-AP entry:

However - just for fun, what if we didn’t have access to the DAP and wanted to figure out what our target was via memory reads and writes? To figure this out, there are some memory regions that are common in STM32 CPUs that are used to store ID and flash information. With this information we can modify the OpenOCD script to read these regions and look for relevant ID information! The table below has the necessary offsets for the ID information:

When we run the updated OpenOCd script and the above commands we see the following results:

We can get the flash size with the following command, using the flash address from the datasheet for this chip, or the repository linked above:

Now that we know the exact target, we can remove the target swd, dap and target lines from our config file, and replace them with a call to -f /usr/local/share/openocd/scripts/target/stm32f2x.cfg from the command line. This will properly enumerate the target CPU. We also know now that this STM32F2 series chip has 0x100 1kb pages of flash memory.

Now that this is working, we can dump the internal flash with the following commands:

We can also debug the controller with gdb using the commands below:

So at this point, we have the flash dumped, we can debug and single step through the firmware, but … can we reflash the MCU?

Let’s do a simple patch with the product string, changing it to “Testing Firmware Patches”. The flash can be overwritten with the following commands in the OpenOCD telnet console:

There are a few steps here that might not make sense, so I wanted to explain them:

Excellent - so we now have the firmware fully extracted and loaded into ghidra, as well as the ability to modify it as we see fit…now it’s time to write some macros. But it’s getting late and I almost missed the monthly post deadline for January so I think I’m going to wrap it up here!

When performing an assessment of an embedded system, you typically want to enumerate and explore all possible interfaces and methods of interacting with the target. Whether your end goal is to hunt for bugs, modify the device’s normal operation or just learn more about how it works, hardware debugging is extremely useful. By utilizing hardware debugging we were able to extract the firmware from this target, set up a live debugger and also modify the firmware. Through this this exercise, we also covered how Single Wire Debug works, as well as how to identify, enumerate and debug an unknown CPU with hardware debugging tools. OpenOCD was also used with a FT2232H based interface to extract firmware images as well as reflash new firmware onto the target. Thanks for reading and if you have any questions or just want to talk more about this kind of stuff please feel free to ping me on twitter

Background To follow up on my last post about SWD and hardware debugging, I wanted to do a deep dive into JTAG from a reverse-engineering perspective. The previous post received a lot of great fee...

BasicFUN MK Teardown Part 1: Flash Extraction Background I noticed not too long ago that a new BasicFUN cabinet came out featuring one of my favorite childhood games: Mortal Kombat. This of cours...