In the last post, we extracted the SPI flash, and found what appears to be a slightly modified Rampage ROM for the NES, see the differences in the start menu below: 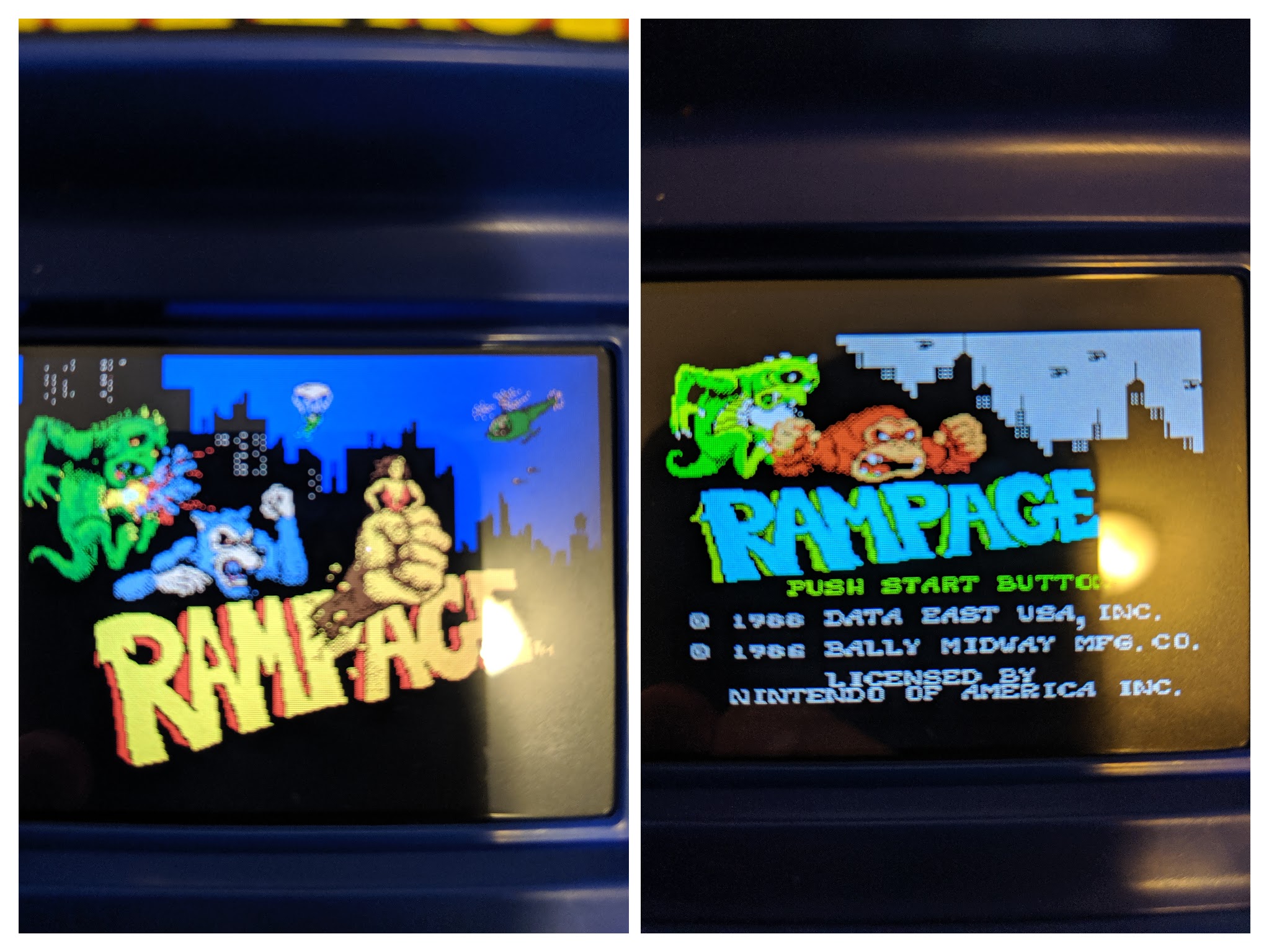 However, the gameplay looks almost identical.

Given this information I had two questions

Before we do any of this, we need to get a better understanding of the layout of the image that we extracted.

We saw before in the previous post that the first 30k appears to be a rough copy of the NES version, with a handful of differences patched in/out

This appears to take up the first 0x30000 bytes of the SPI flash, but there is much more data than that contained in the dump we pulled, there is about 0x80000 bytes total!

What else could be in this flash image?

Well for starters, the startup screen that can be seen below is not a part of the original NES ROM so that is most certainly taking up some space: 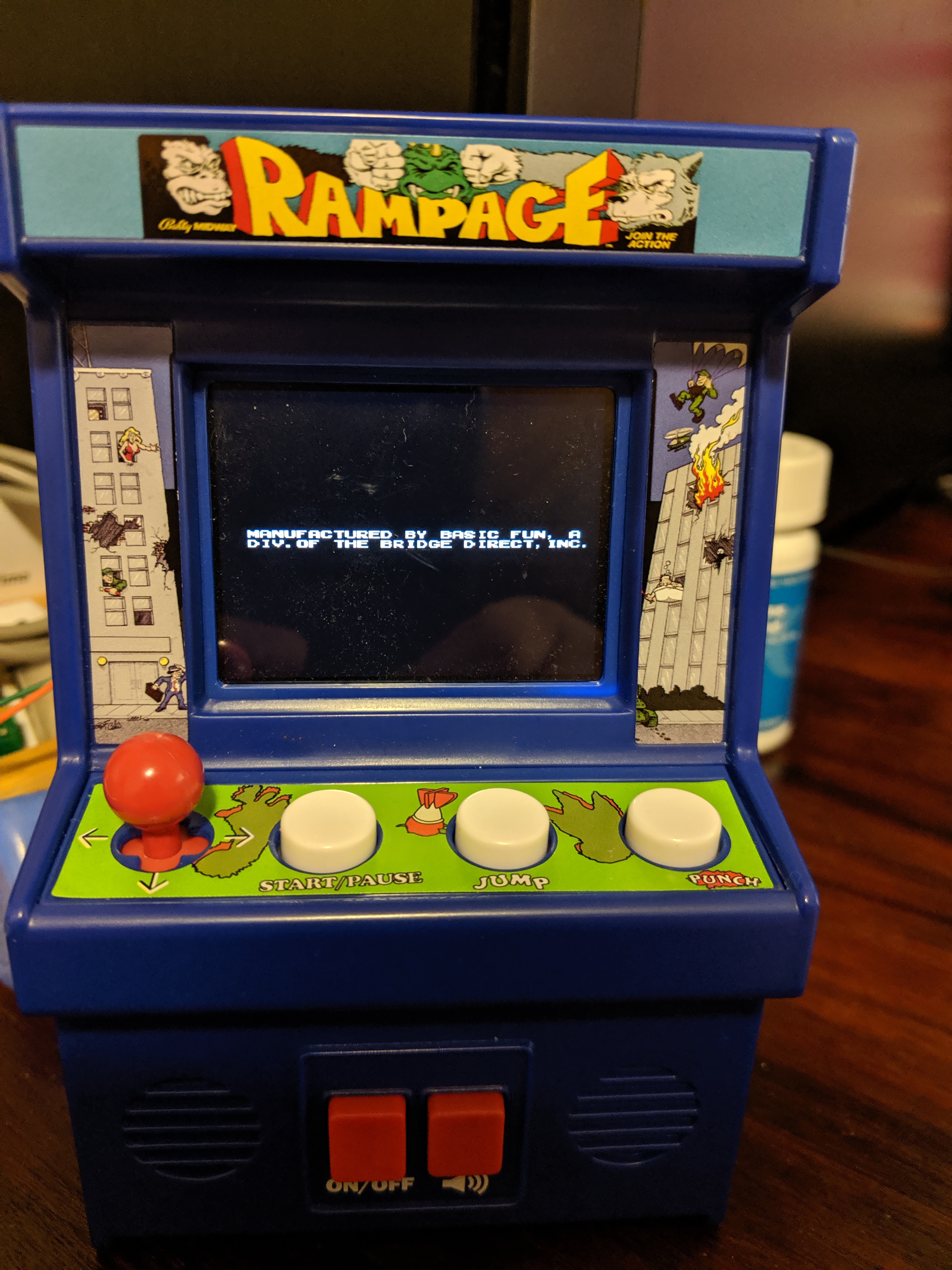 And there is a test menu that can be entered by holding Start and Up on the cabinet while it is powering up, so that must be taking up some space as well! 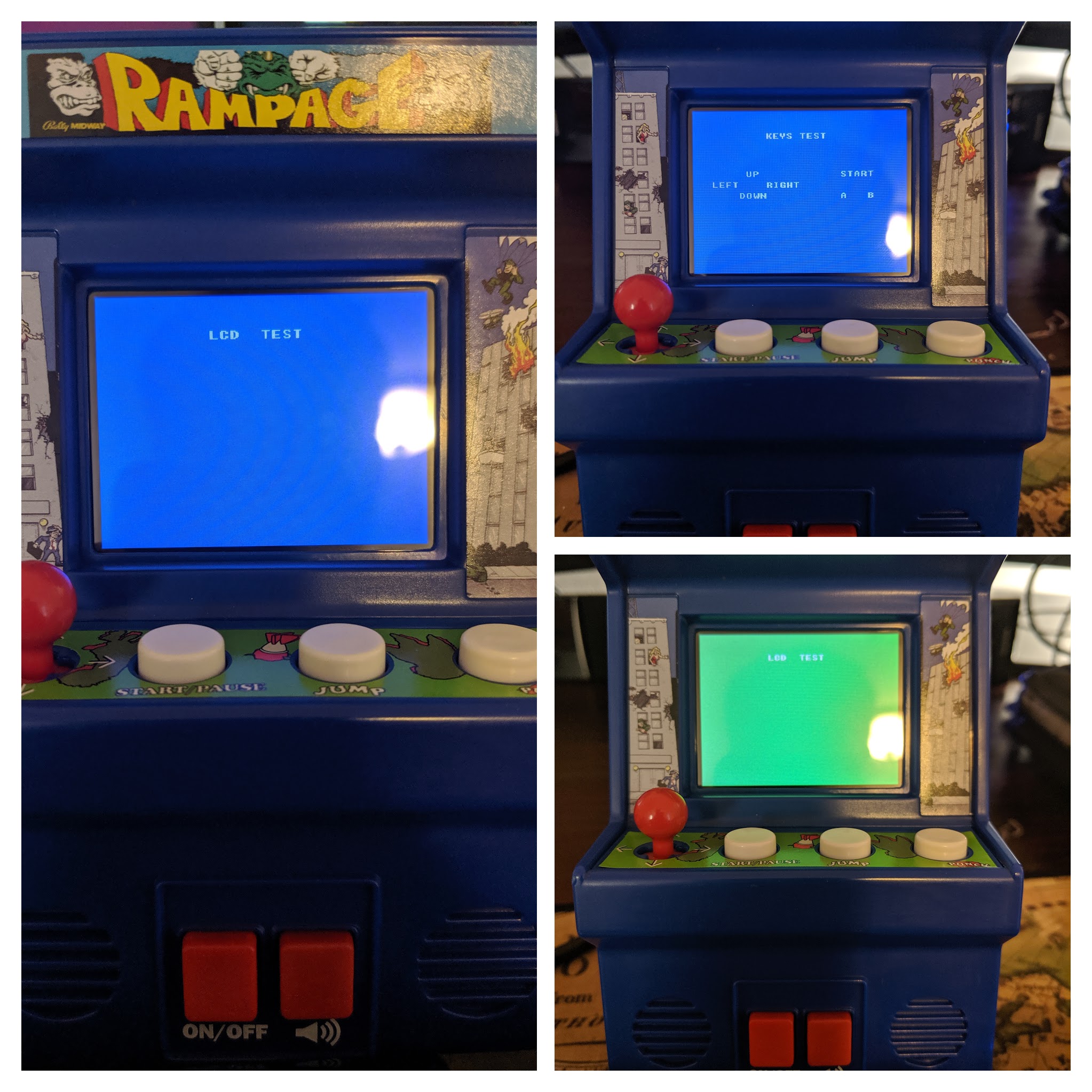 So there is likely some initial bootstrap code that is run that determines whether to jump into the debug menu or just go straight to the Rampage rom.

Moving forward let’s assume the ROM is broken up into these parts:

Ok so now that we’ve identified how we think the flash might be laid out, what can we look for or modify to test our assumptions? Well to understand this a little better we’ll need to take a look into how NES ROMs were structured!

NES ROMs contain two types of data for the most part:

The CHR-ROM was addressable cia the PPU and the PRG-ROM was by the CPU. In order to change what data was displayed on your screen, the CPU would write to memory mapped registers that it shared with the PPU. This allowed the game logic to control what was being displayed on screen and for the CPU to read and write PPU memory. 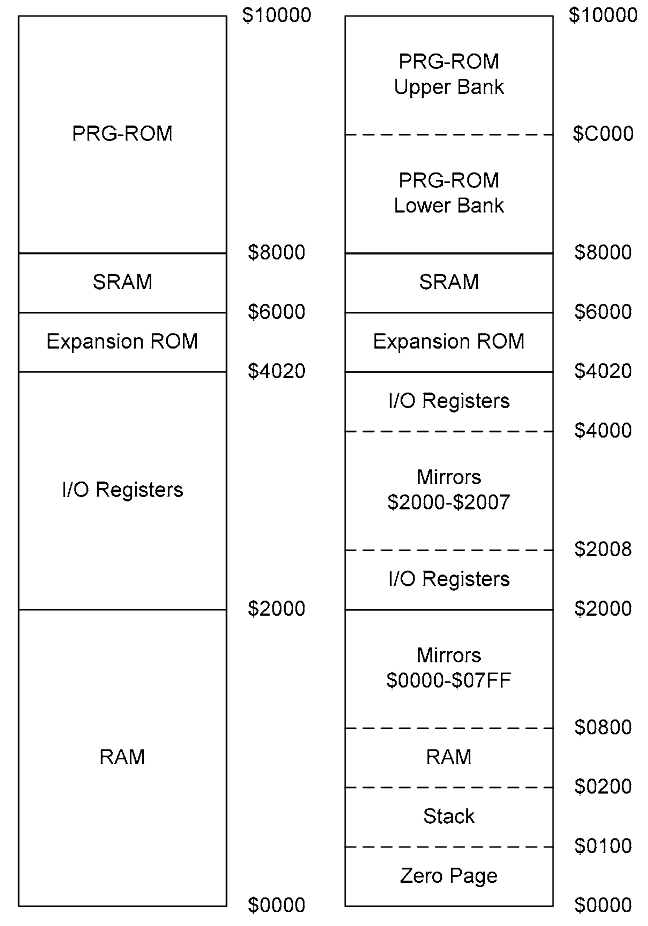 The PPU only had 16K available for CHR-ROM data, and this can be seen below: 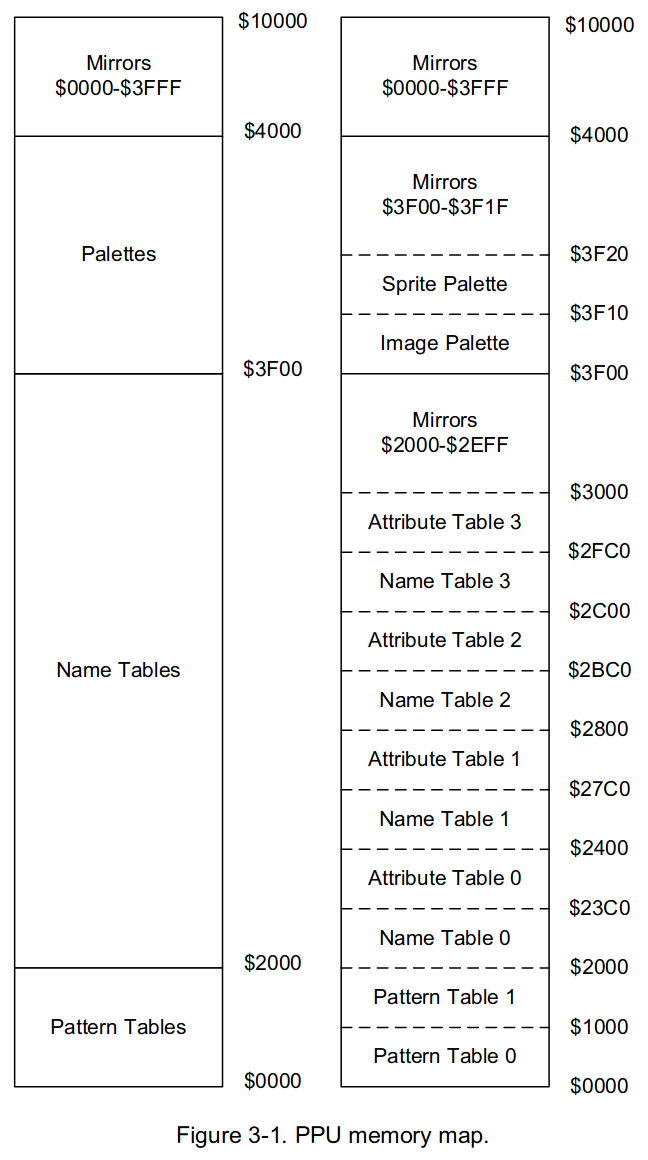 CHR-ROM would typically consist of the following structures:

Essentialy, if a game wanted to map a different section of it’s ROM (CHRor PRG) to be available to the NES, it would issue a command to a mapper this was a memory mapped hardware device on the cartridge that served as an address translator for the NES. Changing these mapper values would alter what section of the PRG-ROM and CHR-ROM was being accessed by the NES. So for example, if you had three 16kb program banks total on your cartridge, you can only access two of those at a time given the hardware within the NES. In order to access this third bank, you would issue a command to the mapper, which would essentially swap out one PRG-ROM bank for the unused one. How this was implemented in software was entirely up to the developers - they used mappers as a way to increase the available program memory on the NES!

This image is an example of how different memory banks might be used, pulled from the wikipedia article linked below

Check out the Wikipedia explanation for a more generalized example!

Right now I’m assuming that there is an initial loader with it’s own PRG/CHR ROM that displays the startup screen and handles the debug menu as well as prepares and launches the Rampage ROM. One thing that we can test to make sure that this is not one large contiguous ROM is replace RAMPAGE on the Flash with a ROM that uses the same mapper and is the same size, like say … Yoshi’s Cookie. I of course legally acquired a copy of this ROM from a cart that I had lying around and replaced the data at 0:0x30000 with the ROM and this was the result! 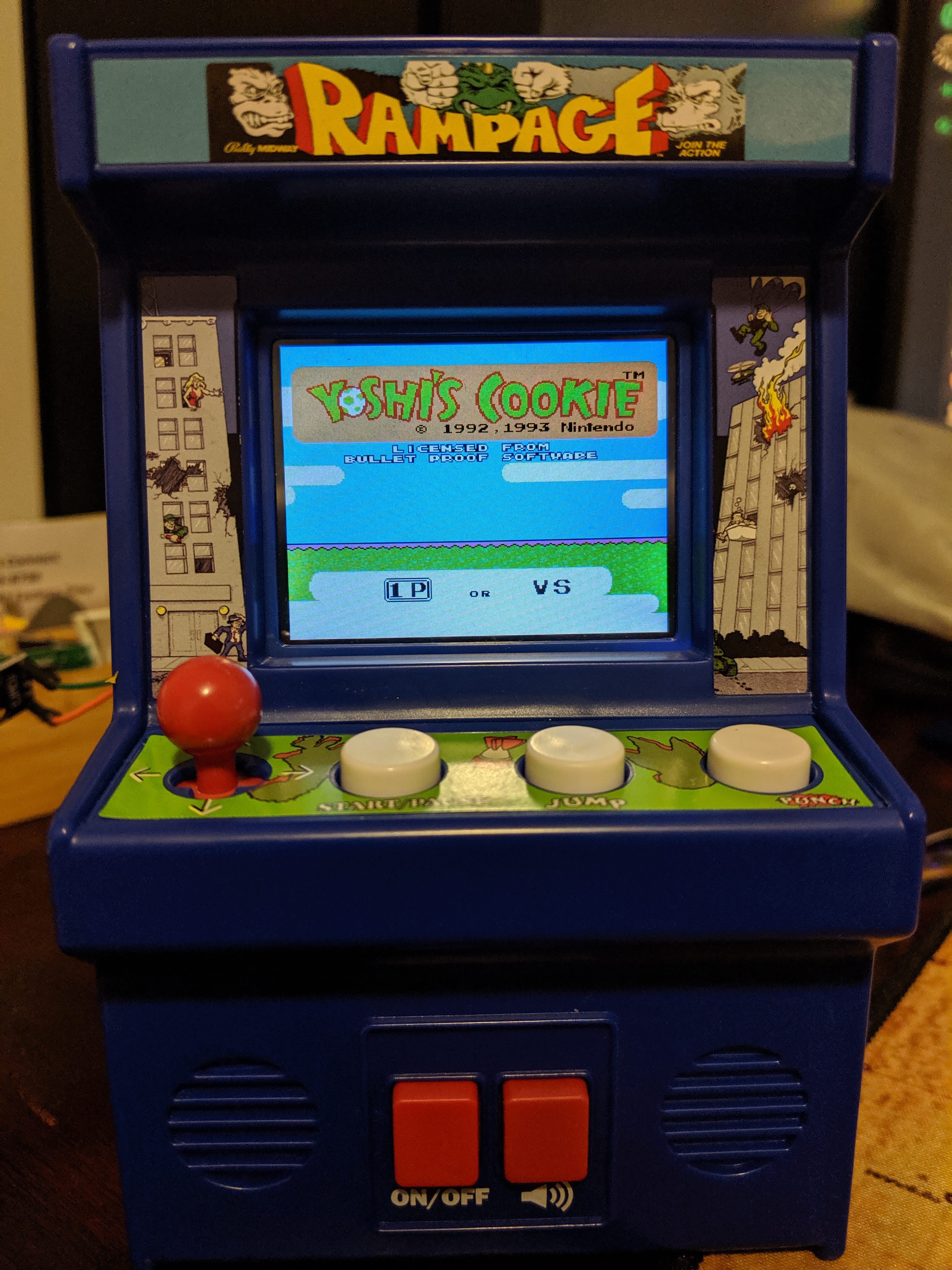 It works and is fully playable!

My hope here is that the loader configures the mapper and mirroring layout of the PPU and that we can possibly modify this in the future to run any ROMs and not just ones that share the same memory sizes and mapper chip! 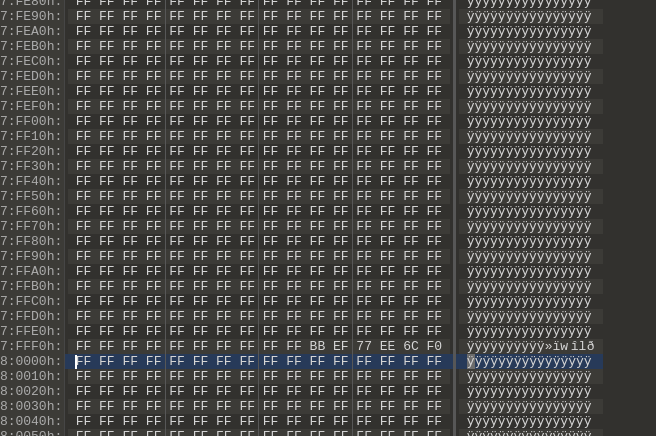 These 6 bytes at the end at 0x7FFFA:0x7FFFF likely contain the reset vector. Now you’re probably wondering “What on earth makes you say that?” – well if we look at what surrounds them we see nothing but nulls (0xFF) and we know from reading the NESDoc that reset These offsets are read in by the NES on bootup to jump the initialization code. The NES has three interrupt vectors that contain addresses within the PRG ROM that the CPU jumps to when interrupts occur. We can test this idea by replacing those bytes with 0xFF and then reflashing the cabinet, the result can be seen below: 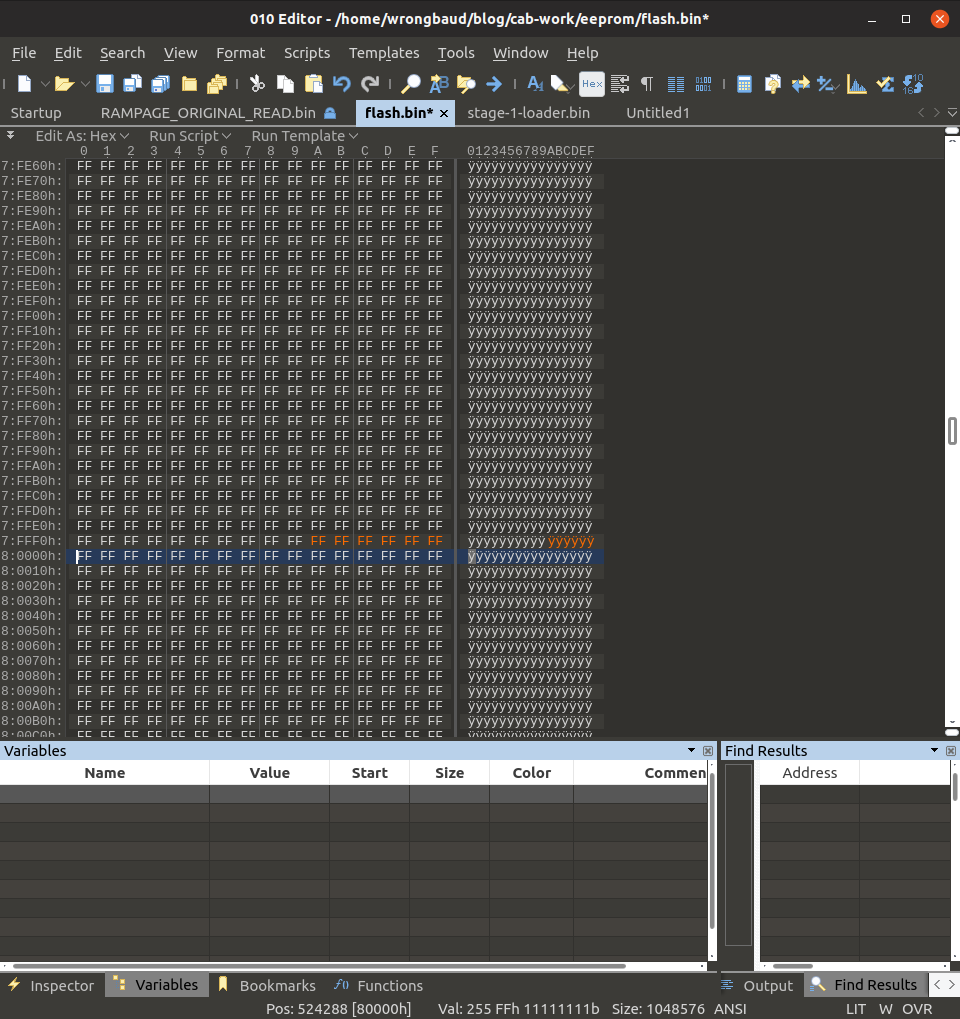 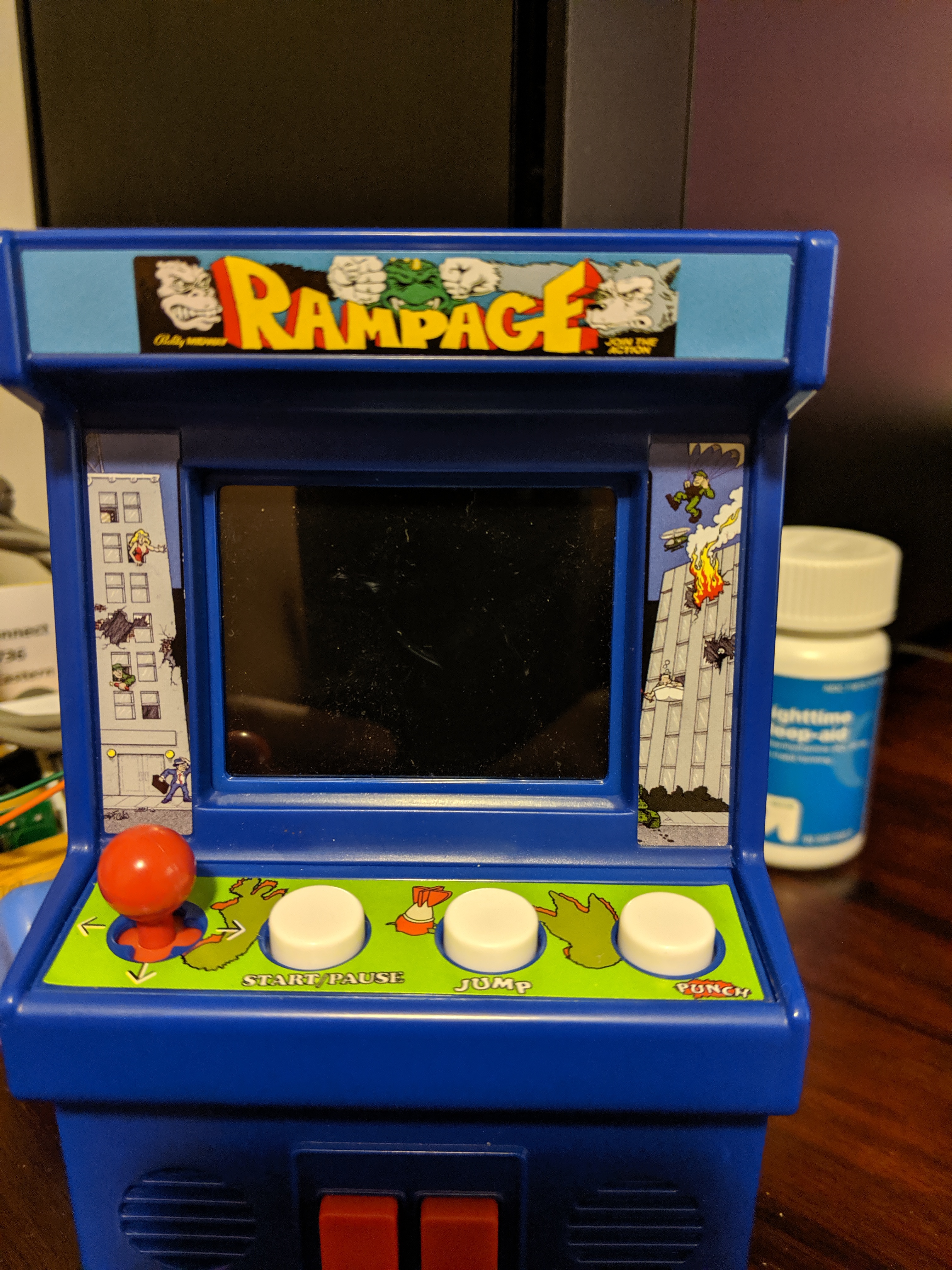 So far we think we know this much about the layout:

We still don’t know where the test menu is, or where any of the CHR data is being stored.

This may be extra data, or a partial game that was not implemented, for now we’ll ignore it since it doesn’t seem to affect the loader or the Rampage ROM. 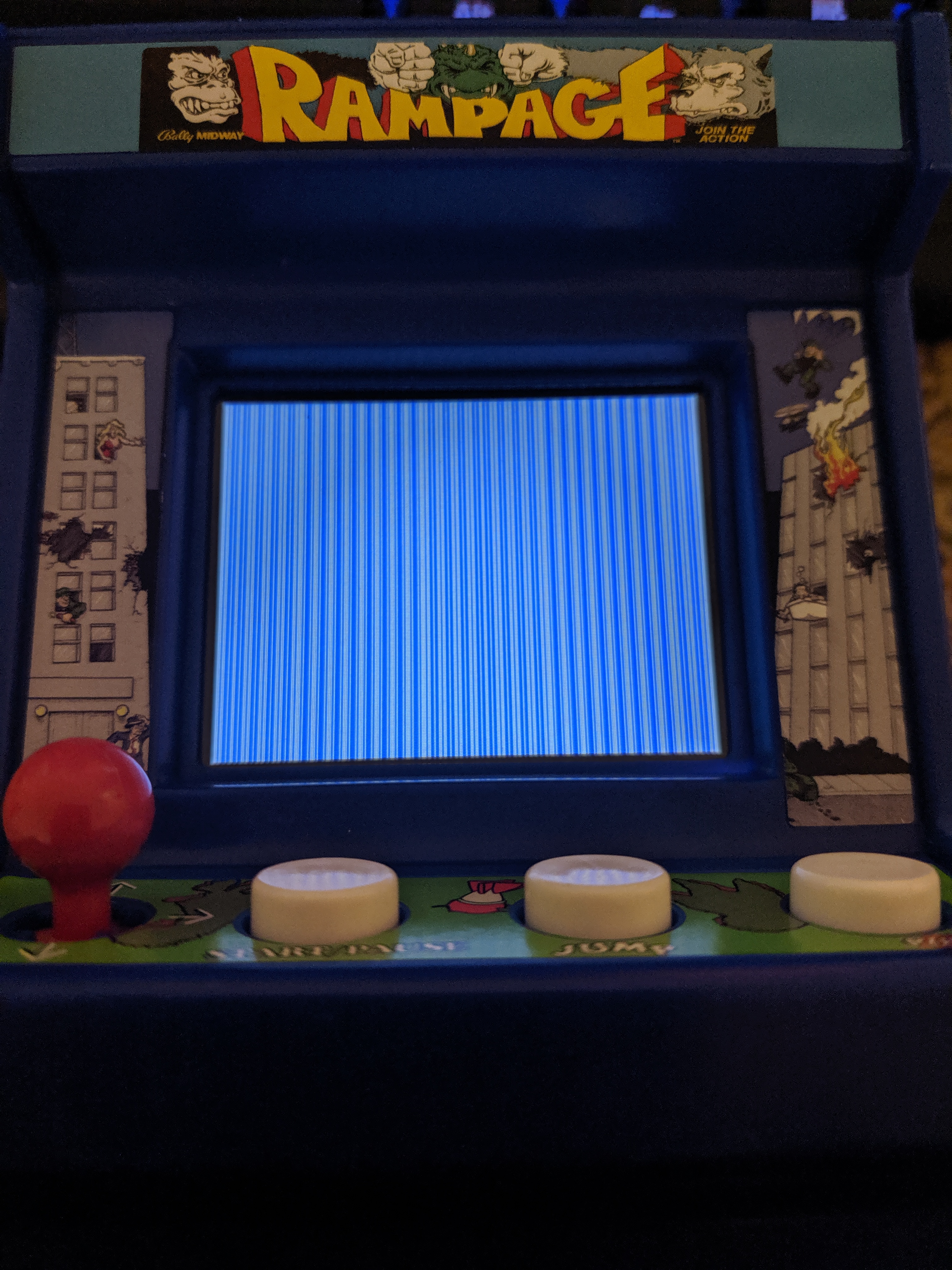 This is the CHR table for the opening menu and the debug menu!

So we now believe that we have a solid understanding of how the ROM is structured we can load up the initial loader in Ghidra and start really digging into this! But in order to do that we’re going to need a loader or at the very least a script to properly load the NES ROM! The next post in this series will focus on using GHIDRA to reverse engineer what we know about the bootstrap code and test menu! Thanks for reading!

Overview Over the holiday break, I received a few more random game platforms from friends and family who know how much I enjoy tearing into these things. While I didn’t find anything amazing or ins...