The Tricore CPU architecture is commonly found in automotive embedded systems, often running an RTOS or even just bare metal firmware. This post will go over setting up an entry level toolchain for the Tricore architecture under Linux, and how we can use this toolchain when reverse engineering automotive platforms. We will also go over and provide a very simple bare metal loader.

This will be the first in a series of posts about the Tricore architecture and reverse engineering Tricore based embedded systems. For this series we’ll be targeting a Tricore 1767, which is an older but commonly used CPU in automotive systems.

In the past when reverse engineering and occasionally developing payloads I’ve written all of my Tricore code in ASM and never really explored the idea of using any available compilers. This series will explore these options and hopefully help some people out along the way…or at least entertain!

The Infineon Tricore architecture is a commonly used architecture in automotive embedded systems. It typically contains a RISC core, micro-controller and often a DSP package. There are 32 general purpose registers, Address: A0-A15,Data: D0-D15. and System: PCXI.PSW,PC, the System registers are considered special function registers. For this post, we will not dive into architecture specifics as we are just setting up tools and toolchains, for those of you interested in some very dry reading, please see this PDF!

Setting up the Tricore toolchain under WINE 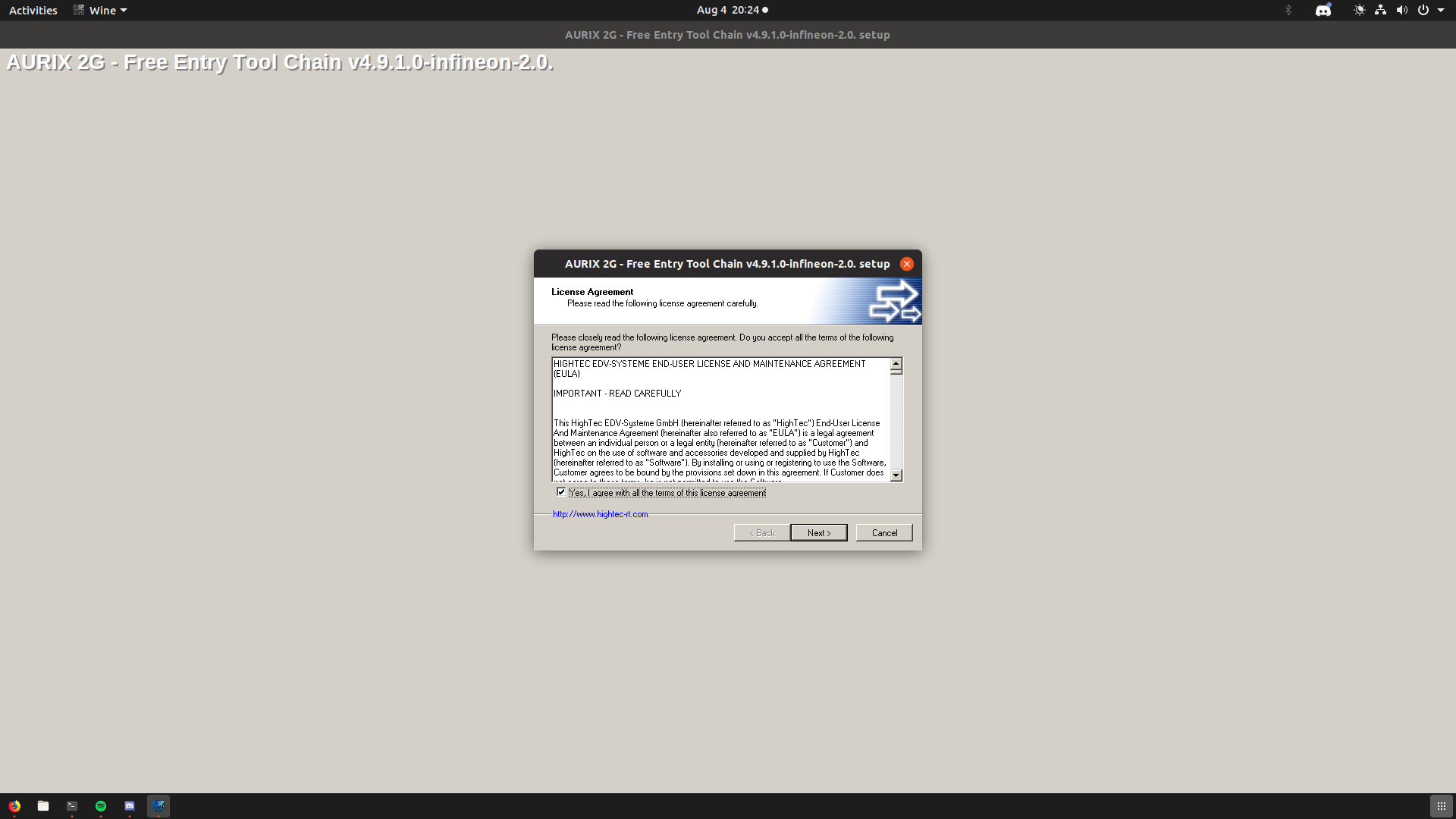 Once the installation has finished, you will find the files we care about in the resulting directory:

You can add this to your path with the following:

Now try invoking the gcc compiler with wine as seen below:

Great! So now lets right some simple code to toggle a GPIO line!

Build a “Hello World” binary to toggle a GPIO line

Lets start with a simple main.c that will (according to our datasheet) initialize and toggle a GPIO line!

Next, we’ll try to compile this code as follows:

Oh no! The first big misstep in our journey has appeared!

Remember the License file we needed earlier? It looks like wine / tricore-gcc.exe can’t find it. After a fair amount of time digging through docs, and troubleshooting wine, I loaded the tricore-gcc.exe in IDA and found out that there was a crucial argument not displayed when you run tricore-gcc.exe --help …

The argument -mlicense-key=dir can be used to specify a directory containing the license file, so lets copy that into our working directory and run the following…

And we have a resulting a.out in our directory!

Most of my experience with the Tricore Architecture is in the realm of reverse engineering. Up until recently, only IDA Pro could be used to disassembly Tricore binary files, however recently github user mumbel recently submitted a Tricore processor module to Ghidra! We will spend the second part of this post building the latest version of Ghidra and checking out this new processor module.

In case you’ve not installed it yet, pull down the latest version of GHIDRA from: github

Since we are targeting a Tricore processor, you will need to build the latest version of GHIDRA yourself,but dukebarman has made a very useful docker container for doing so!

You can use the following docker container to build the latest version of GHIDRA: https://github.com/dukebarman/ghidra-builder

I have fork here as well, which addresses and error I ran into when trying to build GHIDRA the first time

To build GHIDRA using dukebarman’s docker container do the following (this is also in the README):

Once this script finishes, there will be a zip file in the out folder, unzip that to get your freshly built GHIDRA!

Launch your recently built ghidra as follows (change the paths to match your system):

You will see this window asking you to create a project, here I’m making one called blog 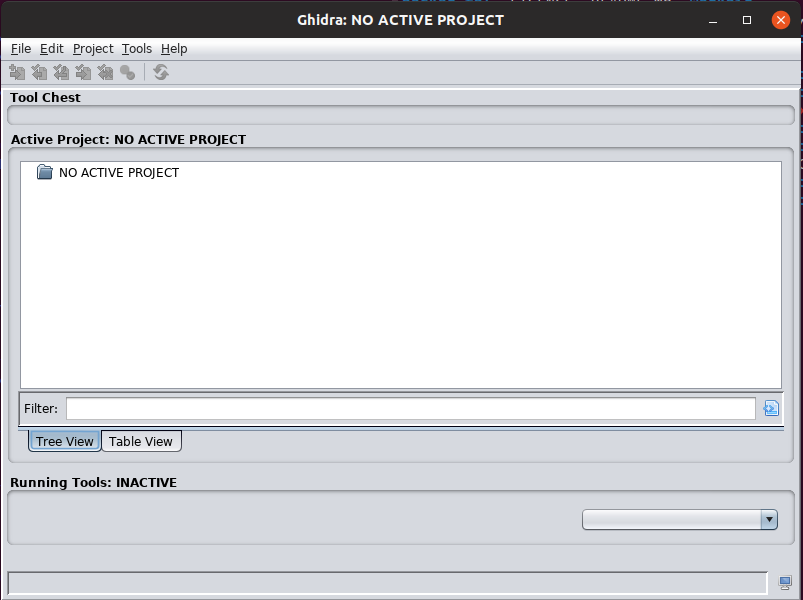 Next we select the project location, choose anywhere you’d like 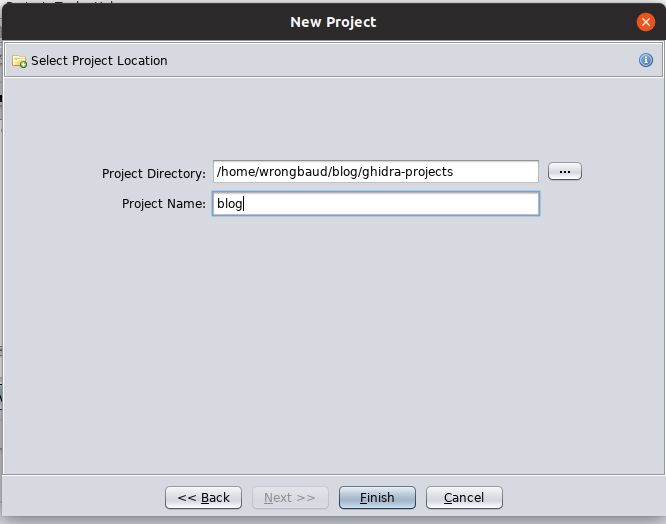 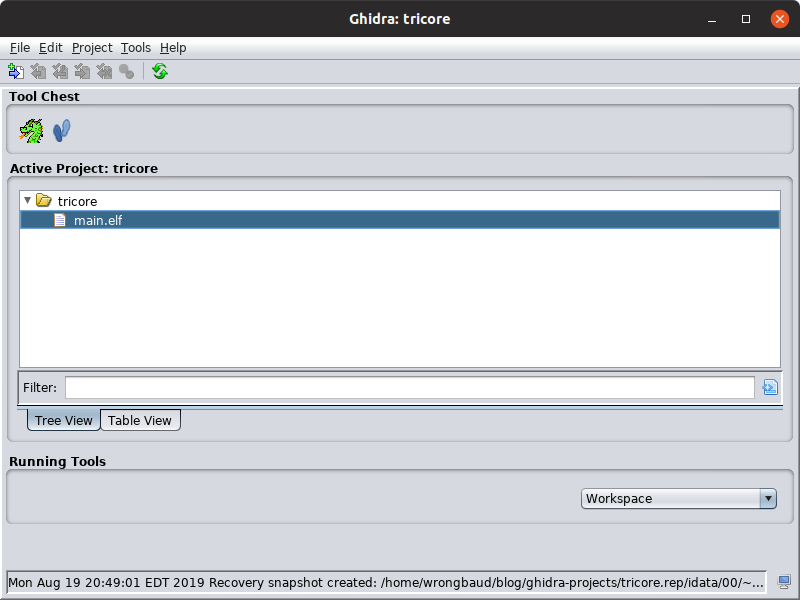 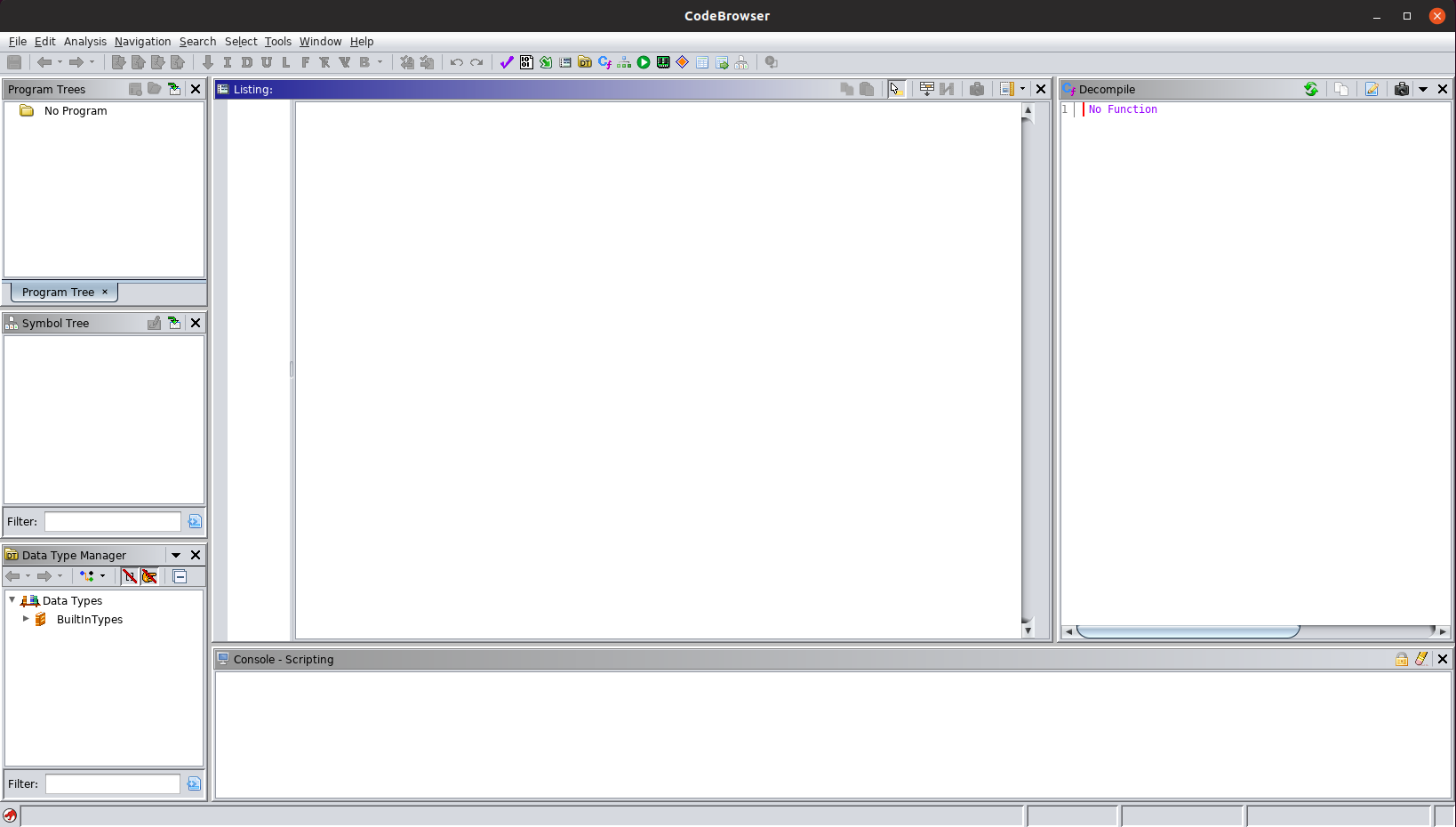 Select the binary that we just generated 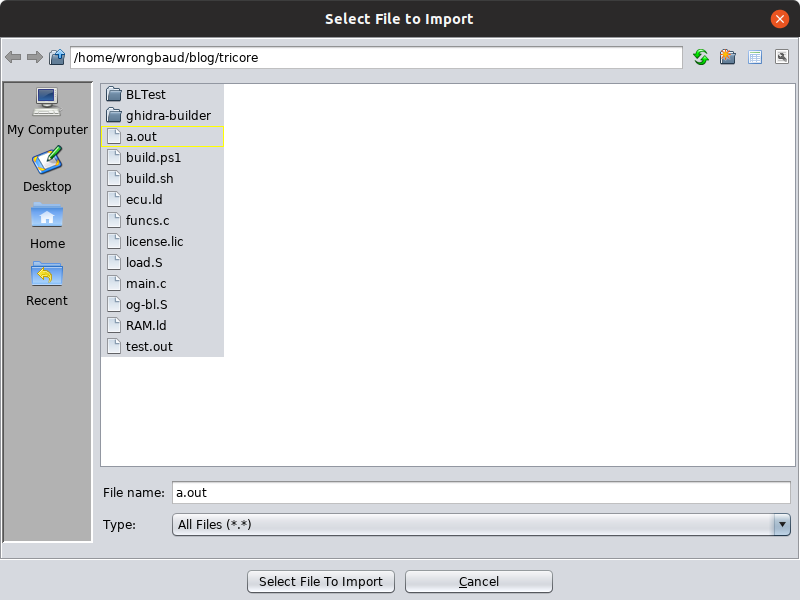 After selecting the binary a new options window will appear, under the Language option click on the three dots to open the language options 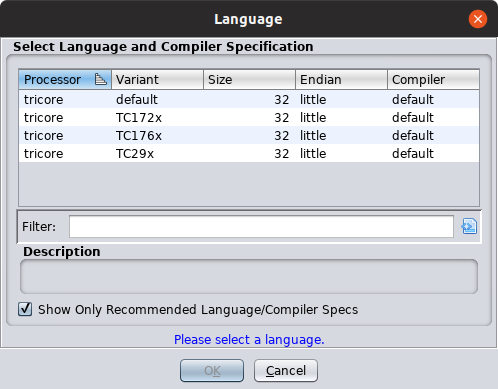 Select the TC176X option since we are targeting a TC1767 CPU, click OK. When asked to analyze, click Yes and click Analyze on the following window. You can also close the Import Results Summary window as well.

Once the binary has been loaded, you’ll probably that some of the functions generated by the compiler are not initially recognized and disassembled.

Press G and enter the address 0x800000AC you should see something similar to below: 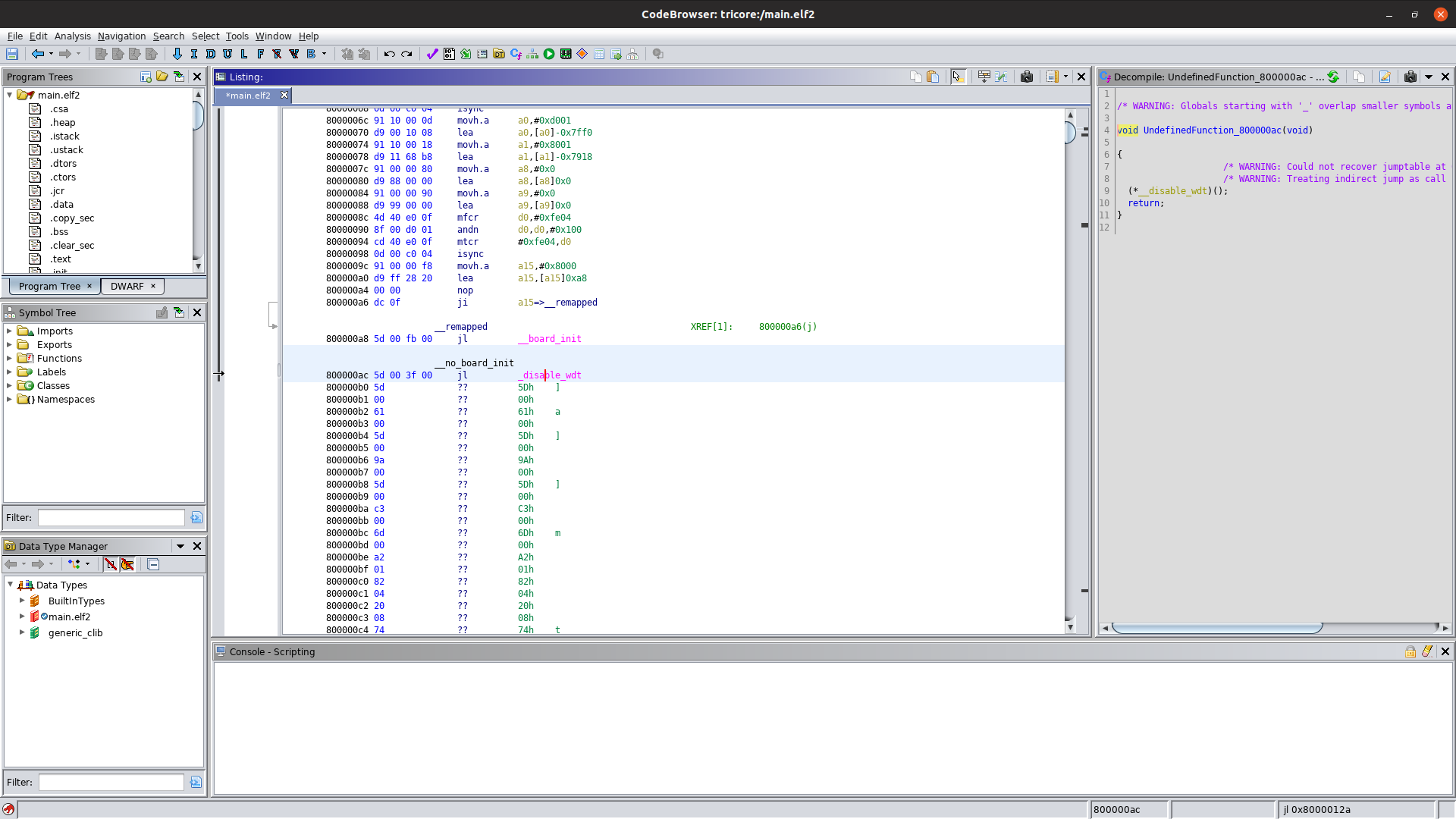 For whatever reason, the autoanalysis stopped disassembling here, pressing ‘'’d’’’ at address 0x800000B0 will disassemble code there. The first time we do this, we disassemble the following instruction: jl __init_csa for those of you who are unfamiliar with the Tricore Architecture, this function initializes what is called the “Context Save Area” which is critical for performing call instructions as this is the region of memory that stores the context for functions when they are called. After this function we see a few more jl calls that were inserted by our toolchain, eventually we see a jump to main! 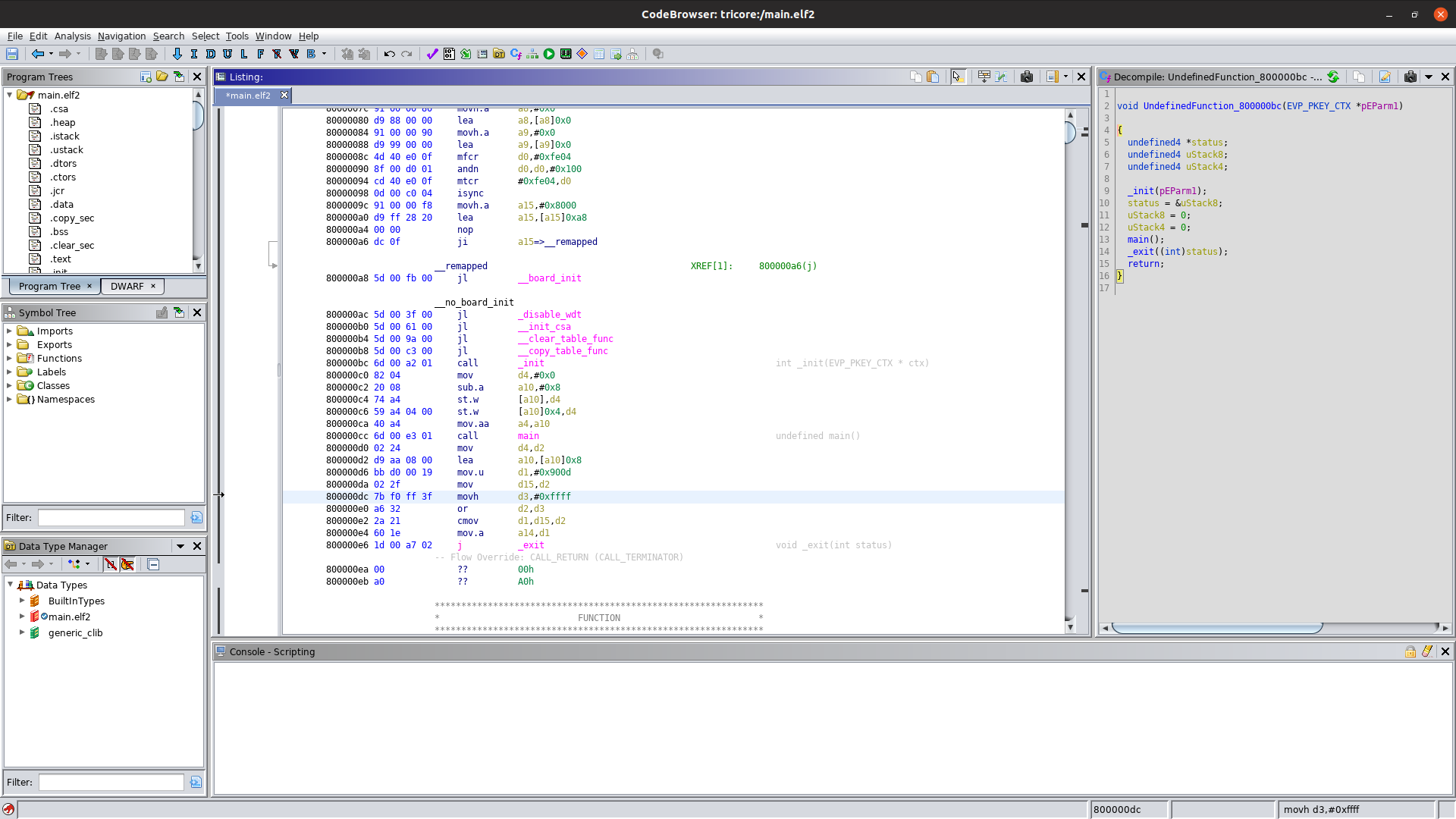 Clicking on main takes us to the following window displaying the code we wrote earlier! 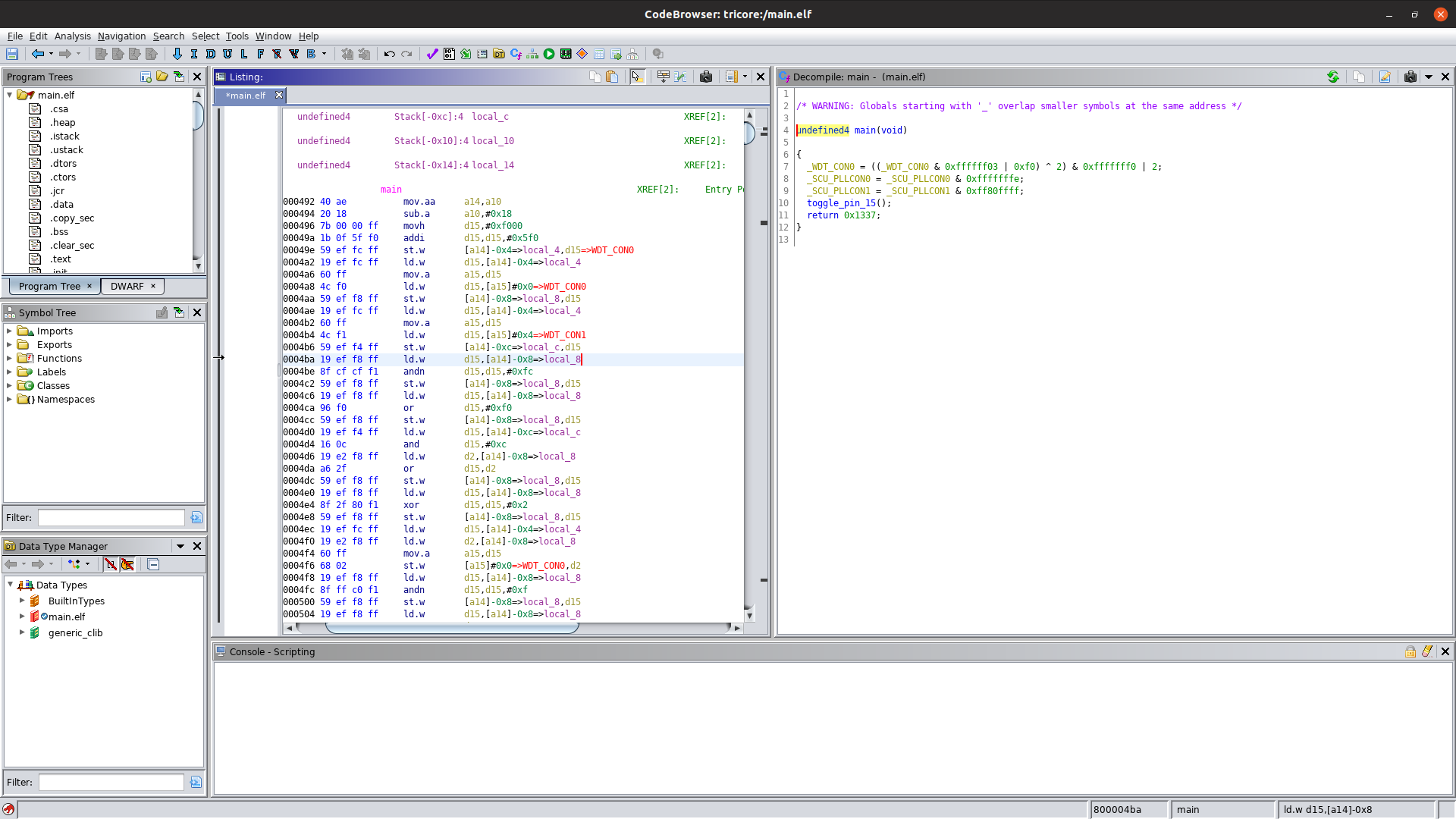 Looks pretty similar to what we wrote before!

With this post, we’ve set up a toolchain for Tricore CPUs under Linux, using this toolchain we wrote a very simple C program to toggle GPIO lines. We also built the latest version of Ghidra using a docker container. Lastly we disassembled and decompiled a target binary using Ghidra!

Background In my last post, we managed to dump the firmware off of an Xbox One controller by using the Single Wire Debug interface. Now that we have the firmware image as well as the target CPU de...

Using Buildroot for Reverse Engineering Overview When reverse engineering an embedded system that is Linux based, one often wishes that they had an examplar system that could be virtualized, if o...

Godzilla Vs. Kong Vs … Ghidra? - Ghidra Scripting, PCode Emulation, and Password Cracking on a GBA ROM Overview This month Godzilla Vs. Kong is being released. As a long-time Toho/kaiju fan, I th...